What do I even call this one?

I can't tell you how much it hurts my heart to post some of the things I do. I have earnestly attempted to expose the divisiveness and rancor in the LBC WITHOUT becoming part of the problem itself. My deepest desire is to be part of the solution. However, so much of the material I post is depressing and challenging and I'm afraid it looks like I am part of the problem. I have resigned myself to this undesirable role. When brothers from around the SBC and LBC send me information due to their own concern I will gladly consider that information and post it for the good of our greater cooperative work. 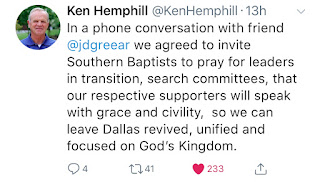 Within a couple of hours of this post (which I greatly appreciated by the way) the Executive Director of my State Convention (one of the men who I understand enlisted Dr. Hemphill's candidacy) sent the following email to EACH of the State Executive Directors in the SBC.

At some point this conversation needs to come to head. If Dr. Hemphill and the other State Executive Directors won't call out Dr. Hankins for his divisive and manipulative tactics then we need a more radical change in the SBC than I even knew. I want to believe that some of the men on this list have responded back to this email with a Christ-like challenge and corrective tone. I want to believe that, I hope that is the case. But this is no longer just "questionable judgment" (as some have assigned the recent partisanship) This is crossing state lines, it is intrusive, it is manipulative and it should be shouted down for the division that it is causing. I am so glad that younger pastors in this convention reject such divisive and manipulative tones and I am hoping these young minsters, teachers, leaders, students and pastors from around the SBC descend on Dallas with such an astounding rejection of this divisive activity that the history books will one day retell the story.

I'll even go so far to suggest that you might want to contact your State Executive Director to assess how he feels about this email and what his response has been. Being united doesn't mean we all must believe the exact same things at every turn, but it does mean, at its core, that we make a deliberate effort not to disparage and speak ill of those with whom we coinhabit the Kindgdom of God. To keep any semblance of respect, Dr. Hemphill must distance himself from this pitifully veiled shot at JD Greear via Russell Moore. Further, I pray that some of these State Directors will speak up and publicly shun these tactics... to the Glory of God.

Russell Moore is causing controversy again-remember last year? As someone who has worked for decades to improve race relations, especially in the SBC, I find the following troubling:

Let me know if you have questions, comments, or ideas.

Posted by Jay Adkins at 9:13 PM No comments: