Disaster Relief and Hemphill "Rallies" in the LBC

Today, I was forwarded, by a number of people, an email that apparently went to all SBC ‘Blue Hats’ in Louisiana. I’ve actually served as a Blue Hat as well as a White Hat during Katrina (this is all Disaster Relief speak for those of you who wouldn’t know) but I didn’t personally receive this email from the LBC building.

I’m not sure how to even process what I’m seeing. I think that someone at the Baptist Building in Alexandria either actually thinks we are all stupid or truly doesn't care what we think at all.

Coming off the heels of the story about the inappropriateness of the LBC designing, developing, and hosting the official campaign website of Ken Hemphill we now have this equally, if not more, frustrating action of our Disaster Relief workers being encouraged not only to attend these “campaign rallies” for Hemphill but for them to be “asked to prepare food for these rallies.” My head is about to explode.

This time, however, it’s not just some coding and an inanimate server that is at issue, it’s an important and highly respected ministry arm of our shared efforts to help in time of great disaster. What about the actual CP funds use here? Maybe the whole thing is being bankrolled by a “campaign contributor” but what of the DR kitchens that I assume will be used? What of the food? What of the ask itself? These people are preparing what I assume is free food for all those in attendance and we know that free food always draws a crowd (especially for college students). What about the rallies for Greear? will the LBC pay for that? Can we invite him and feed people in at least the appearance of fairness... or is the North Carolina DR team handling that?

There was an email sent earlier to the Blue Hats please notice the change of time for West Monroe at McClendon Baptist Church.

Now is the time to come to the aid of your state… Sound familiar?  Well it is a time to prepare and one of the ways we prepare is to contact our volunteers listed in our data base and see if we can get a response.

On Tuesday March 27, 2018, we are preparing to feed meals at LC in Pineville for Lunch and Supper at McClendon BC in W. Monroe.

The purpose of these meetings is to see if our contact system is working properly and set a time for you to meet a candidate, Dr. Ken Hemphill, that is being nominated for president of the SBC in Dallas this June.

We have been asked to prepare the food for these rallies and it will be a training event for our feeding teams as well as time for responding using the same procedures that we hope to use during a disaster.  If you can attend please wear your yellow shirt and cap.

This is being sent to our Blue Hats and asking them to contact their yellow hats trying to have as many as possible attend these events. Thanks for your commitment and help during this preparation time.

If you can attend please RSVP by email to:
(emphasis added)

I’m leaving the recipient and sender’s names out of this email out of compassion for their inboxes… because, I’m sure that none of this was their idea anyway.

Although Ken Hemphill has agreed to move his website off the LBC server this is clear and unequivocal evidence that the abuse of power to which I’ve been referring over the last few years has not changed.

LBC leadership does not get it. They have (he has) won for so long they do not think they can lose – so they simply continue to do whatever they want. I’m not sure how this convention will ever recover from this myopic worldview.

May God raise up men in this state who will help us throw off the shackles of this ungodly and worldly tyrannical mindset. Will it ever change?
Posted by Jay Adkins at 2:20 PM No comments:

If I have learned anything during my time as a pastor in Louisiana it is confirmation that power tends to corrupt and absolute power corrupts absolutely (originally from a letter by John Dalberg-Acton 1st Baron Acton to Mandell Creighton dated April 5, 1887). Please no jokes about the political irony of living here in the home state of Huey Long where “Every Man is a King.” For years I’ve wondered… what will it take for my fellow LA Pastors to see through the obfuscation, manipulation and bad stewardship which we allow to continue unchecked in . I’m flummoxed as to what will it take to make significant changes in leadership in our state convention?


·         If the outright rejection of engagement with even the possibility of a 50/50 CP split is not enough to convince you we have problems (the LBC keeps a higher percentage of CP money in the state than any other state convention in the south [I inadvertently left out "in the south' in my original post. My apology for the confusion] and we were told that such a split would only be considered if our Louisiana churches gave more to Alexandria);
·         If the inordinate amount of money given to Louisiana College and the earlier SACS validated concern of undue influence is not enough to convince you we have problems (Louisiana College gets more money from the LBC than NAMB gets from the LBC and at the time of my research a few years back they received more than any other state convention connected college or university);
·         If the lack of transparency in financial accountability from the Executive Committee is not enough to convince you we have problems (I’m not suggesting fiscal illegalities or mismanagement of that kind, but some pastor friends have regularly attempted to get information or reports regarding LBC expenses but to no avail);
·         If the heavily anti-reformed (arguably fundamentalist) tilt of the Baptist Message and its apparent distrust for certain SBC entity heads is not enough to convince you we have problems (over the last few years not one published article regarding the entities have offered anything but negative critique regarding leadership at the IMB, NAMB and the ERLC as well as a possible SBC presidential candidate);

…then maybe this will be the issue that will finally convince you we have a problem.

For years there has been an unwritten practice that candidates for the Presidency of the SBC do not actively engage in campaigning. Certainly, we know that campaigning goes on between friends and acquaintances at the coffee house, in the seminary student center, during Sunday school classes and at association meetings, but the practice has generally been relegated to those private, person-to-person meetings and not been espoused by the candidates themselves. However, that is certainly not the case in . Political expediency rules the day here in the Pelican state’s Baptist Convention. (In my opinion, this unwritten practice feigns humility and as far as I’m concerned I’d rather forego it and have a deliberate statement from the candidate’s mouth as to why I should vote for him and not for the other guy, but that’s just me.)

In a full plenary session of the Executive Committee of the LBC in 2016 Dr. David Hankins, during his Executive Director’s Report, presented a statement (with the caveat that he’d never done this before) on something akin to “5 reasons why Baptists shouldn’t vote for JD Greear.” For transparency’s sake, I was not at this meeting but I was contacted by a number of attendees and told about the shocking display of impropriety which took place before the historic convention in . I wish I had specifics to offer regarding his talk, but none of that portion of his speech was reported on in the Baptist Message the following week. When asked why that portion was not reported on in the print media it was said, “Well, we can’t print everything that happens in the meeting.” Keep in mind, it wasn’t just something that was said, I understand that it was the key portion of his address.

Forward to yesterday afternoon (March 15th). I was sent information that the LBC is the host of and likely designed the website for Dr. Ken Hempill’s 2018 presidential campaign, www.kenhemphill2018.com. Can you imagine? A large state convention’s Executive Director publicly and in his official capacity during a plenary speech, forcefully and deliberately lobbying against a candidates and then two years later, that same state convention actually HOSTING the CAMPAIGN website for their particular candidate on the state convention servers. It is unheard of and it is inappropriate.

Think about this friends, Pastors in who are either still deciding who will receive their vote, or for those who, God forbid, intend to vote for Dr. Greear, our state convention is the online (and arguably print) headquarters of the “traditionalist candidate.” In all honesty, given what we have seen from the Baptist Message and the actions of LBC leaders, this turn of events should not surprise anyone. Yet, I remain shocked by this action. I must ask, does ANYONE else in this state have a problem with this terribly inappropriate use of our convention resources and the clear lack of concern for those of us who might be on the other side of this isle as it relates to the coming election?

I’ve attempted in times past to point to the manipulation and hubris of the actions of some of our state leaders, but most of those words fell on deaf ears. Surely now my brother Pastors will finally speak up about this action. Surely this is such a clear violation of common cooperation and convention work that someone will do something about it. Or will it be more of the same… good pastors, not wanting to rock the boat for fear that they might be blackballed from the cool kids table, or worse yet be passed over for that big church in the parish seat?

Please Pastors do the right thing and call for change. Call for change in the tired and entrenched leadership, call for transparency, call for a laying down of arms, call for the inclusion of all our churches that voluntarily function in accordance with the BFM, and call for an end to the divisive and mean-spiritedness which has gone on for too long in this state convention.

I am calling on pastors of the LBC to contact the Executive Office of our state convention and demand that (1) convention employees cease their open (meaning in their official capacity as a convention employee) campaigning for one candidate over another, (2) to cease the open negative speak about one candidate over another and to (3) immediately cease hosting the “campaign website” (I can’t believe I’m even writing these words) of any candidate for the Presidency of the SBC, unless of course, they want to host sites for BOTH candidates as a ministry and service to the churches of the Southern Baptist Convention. However, something tells me it won’t get that far.

In the same paragraph of the earlier mentioned Lord Acton quotation he also wrote, “There is no worse heresy than that the office sanctifies the holder of it.” It’s time we open our eyes and admit that the Louisiana Baptist Convention is broken and is in desperate need of real and lasting cultural change. We CAN do something about it! The question is, who has the backbone?

In case you need any proof, I've done the research for you... The LBC is hosting both the campaign website (top three pics) as well as hosting the campaign video interviews on the LBC Vimeo page (bottom pic). 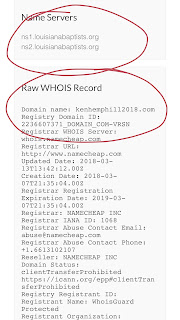 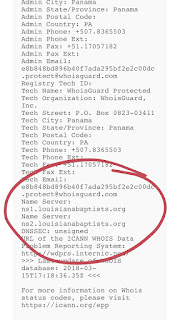 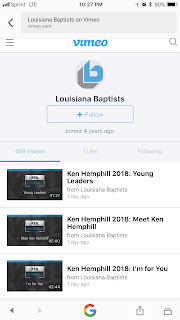